Skip to content
Why Does It Take A Village To Raise A child?

Why Does It Take A Village To Raise A Child? 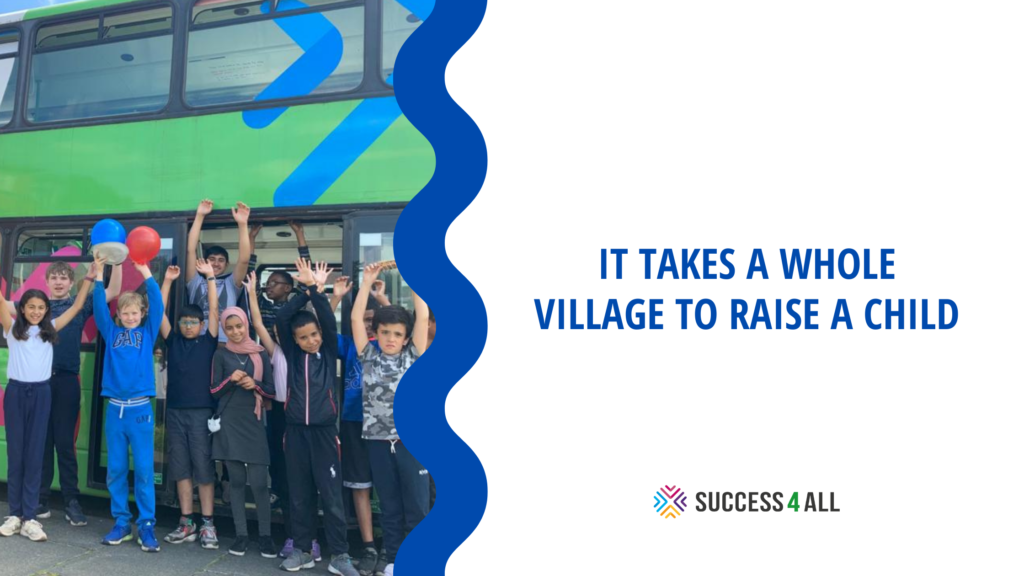 Two proverbs shape and underline much of our work here at Success4All.

The first is, “It takes a whole village to raise a child.” The second, “Each one, teach one.”

Both are popular proverbs that are echoed all across borders and reiterated in many languages.

Both are short, powerful and encapsulating, yet equally, they have a unifying factor that binds them together, community. One could also argue that they were both born out of a struggle.

As Black History Month 2021 comes to a close, we want to tell you the story behind both proverbs, how they came to be, and what they mean to us.

It takes a whole village to raise a child.

Even though Hillary Clinton brought this quote to the masses, the origins of this proverb originated from the Nigeran Igbo community. The proverb insinuates that it takes a community or a group of people to raise a child.

All of these people have a significant role to play in a child’s life. It would be incredibly difficult to imagine a society where a child is single-handedly raised by one individual. Why? Because it’s a tough & near-impossible job to do alone. Raising a child is a full-time job, and like many full-time jobs, eventually, you need to bring someone on board with you.

Caring for one another’s child/ren is also embedded in so many cultures and communities, and it’s an unwritten rule that we all abide by.

The village in the proverb naturally becomes a community of people who have a shared responsibility in the development of a child. The intersectional dynamics allow the child to be exposed to be a wide ray of knowledge, experience and outlooks. It enables them to learn not just about themselves, but the world they live in. They learn how to interact, communicate and build relationships.

From our very first Learning Hub to our latest, the Learning Bus, the community remains at the helm of our work.

We value community because its role in child development is greater than what we can imagine it to be. Equally, without the support of our community, we wouldn’t be here.

Each one, teach one

The second proverb is an African-American proverb that originated in America during the slavery period.

When the slaves were denied their human rights, including the right to an education, they would take it upon themselves to learn how to read and/or write. Once they managed to do so, they saw it as their duty to pass on their newly found knowledge to others.

Essentially, they became the teachers.

Here at Success4All, we believe it’s our duty to share & to pass on knowledge to the children, young people & their families.

Whether it’s in our Learning Hubs, Clubs, Summer Schools or even within the Success4All team, we’re always sharing knowledge with one another, and we encourage our young people to also share and learn from one another.

That’s how our tutor-befrienders came to be.

Our young volunteers are “gold dust,” not only do they have the knowledge and intellect, but as our Founder, Caroline Afolabi-Deleu put it: “Sometimes, they (volunteers) were from the same school, or they lived in the same area or knew the families personally, so they have lots of local intelligence as well as the intellectual knowledge.”