Skip to content
“They’ve made a big difference in my life.” ~ Venus

“They’ve made a big difference in my life.” ~ Venus 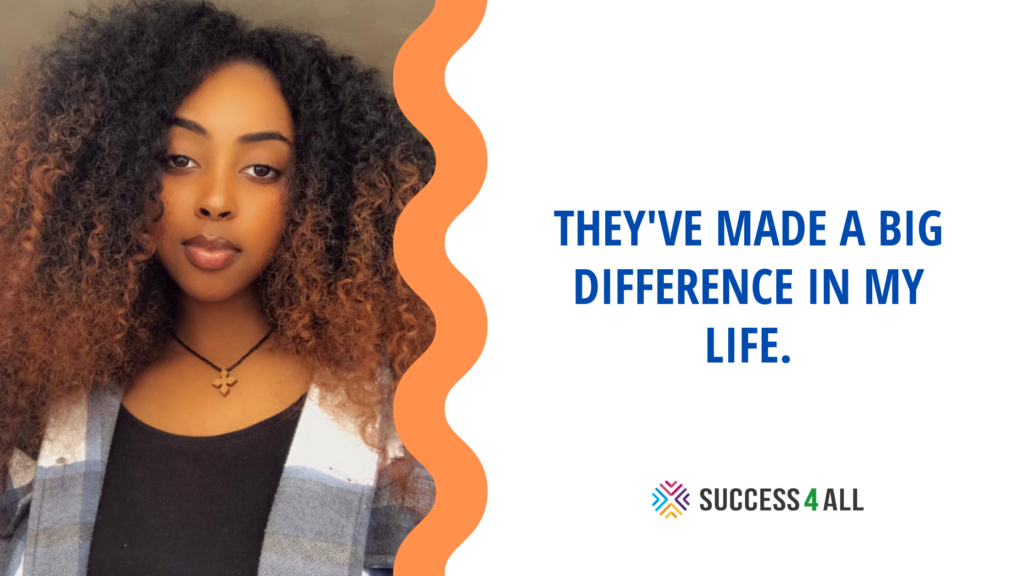 Venus came to the UK in 2011 from Eritrea when she was around 10 years old.

She first came to Success4All needing help with English, and later with subject-specific mentoring.

She is now studying Health and Social Care at Newcastle College with aspirations of completing a nursing degree at university.

In her spare time, she enjoys having fun with her family and friends and keeping active, as it provides her with a moment of self-reflection and bliss.

This is her story and journey with us.

When I first came to this country I wasn’t treated very nicely.

That’s exactly how I was treated, and I wouldn’t want anyone else to get treated like that, because it’s not good, especially when you’ve come to a whole new country, new job, new language, everything. It brings your confidence down and it puts you off.

Success4All has helped me bring back my confidence, and now I like meeting & communicating with people.

The majority of my friends and family are not based in Newcastle, so it can be a bit depressing since there’s literally no one. Being involved with Success4All has given me that sense of community back, as it has provided me with the space to meet so many different people and people with more knowledge than me.

Once I built my confidence in speaking English, I started doing subjects that I was completing in school for example; maths and science.

I feel like going to school is not enough, especially if someone had just moved to the UK.

Take my experience, for example, I came at the end of year five and SATS were coming up. All the students knew what they were talking about and so the teacher moved me to a class with a group of other students that were in a similar position to me and we were just given work to complete.

I was just clueless.

I would definitely recommend Success4All because I feel like going to school alone wouldn’t have been enough. I just thank them, because they’ve made a big difference in my life.

I’m now working towards going to university, that’s the dream. I’m studying Health & Social care because I like helping and supporting people, and I’ve done the subject since I was in high school.