Skip to content
“I was left feeling quite fulfilled” ~ Eisha Mohammed

“I was left feeling quite fulfilled” ~ Eisha Mohammed 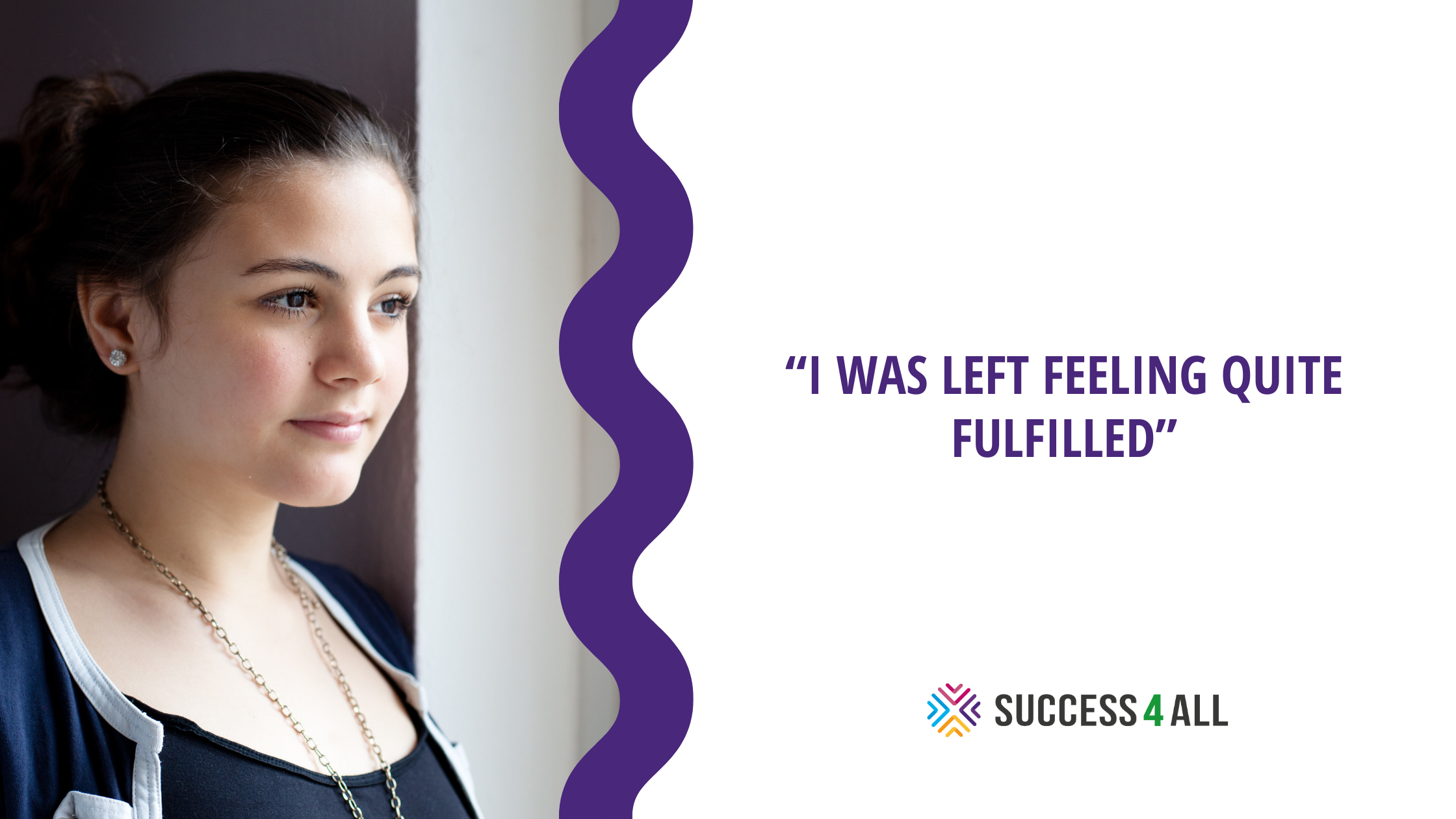 Eisha Mohammed is a year 12 student studying Psychology, Politics, Philosophy & Ethics. Her ultimate goal is to join the Crown Prosecution Service as a barrister once she completes a degree in Law.

When she’s not studying, Eisha works as a lifeguard at a local swimming pool centre and volunteers at Success4All as a tutor-befriender. Like many Gen-Zs, Eisha still manages to fit in several hobbies, including drawing, baking, swimming of course and as of most recently, skateboarding.

Thanks to players of the Postcode Lottery, Success4All were provided with the opportunity to train Eisha into the role of a tutor-befriender. A role that she explains left her feeling ‘fulfilled’.

This is what she had to say about her volunteering experience.

I’ve been volunteering for Success4All for a year now. It’s been good and it has provided me with structure and it has helped me organise my days and myself in general. Normally, I tend to do things very last minute but with the tutoring, I couldn’t.

As a predominantly EAL tutor, I was mostly supporting tutees with English. I remember my first tutee, she was young and she had difficulty with English but I found that we both loved art so at the end of every lesson I would teach her how to draw something, and that helped her come out of her shell.

My second tutee didn’t speak English. She couldn’t assemble a sentence in English and she would often get her words mixed up so, it was incredibly hard for both of us to interact with one another. We relied heavily on Google translate, and I also made much more of an effort in creating interactive content. By the end of the tutoring, she was able to compose sentences & pronounce words correctly. I was quite shocked at the improvement because I never imagined myself as a tutor and I didn’t think I would be very good at it but after seeing her progress, I was left feeling quite fulfilled and speechless.

This experience provided me with the opportunity to pick up new skills as well as develop my existing capabilities. Overall it has been an enjoyable journey particularly as I had never really talked or interacted with kids before. I wasn’t a big fan of them, but now I’ve grown to them a lot more and the experience has helped me land my job as a lifeguard.

*Disclaimer: The girl photographed is not Eisha. Photograph by fotografixx from Getty Images Signature via Canva